A curve is the result of regular blood glucose readings taken over the space of 12 or 24 hours, on the same animal, with notes on timing and amounts of insulin and food. (For how to take a reading, see hometesting.)

The curve shows the action of the insulin on the animal's system, and can be used to adjust dosage. It's useful to find the highest and lowest blood-glucose readings of the day, the peak action time of the insulin, the onset time and duration of the insulin. See also Insulin for more information on how long your particular brand of insulin is expected to last.

Some people and even vets mistakenly try to base an insulin dosage on one or two readings. This is dangerously mistaken -- there's no way to know if that reading was at a high or low point in the day, or if the reading was skewed due to stress or even from being at the vet's. Any change in dose should be based on at least the information of a good mini-curve.

When and how to curveEdit

When first regulating, it's not unusual to take a curve or two every week. Later on, many people take a curve every few weeks, to obtain analytical data to help decide whether, and by how much, to increase or decrease the pet's insulin dosage. Some people take a 24-hour curve if their preshot and shot check numbers indicate that there may be significant differences between their pet's AM and PM cycles.

Keeping your curves, whether in written or graphed form, is an essential part of recordkeeping. Many glucometers come with an optional data cable for uploading readings to an excel sheet -- this can help tremendously too. You can help the Petdiabetes Wiki by copying or linking to your logs and curves in your pet's case study.

Readings are generally taken once every 2 hours, though it's possible to be more or less frequent. The minimum useful curve is the mini-curve.

Some people are adept at reading the numbers themselves, with notations like this:

Others find this information easier to interpret using a graph. Download the spreadsheet below[1] to make graphs like this one. Use the US or International version as appropriate for your country. 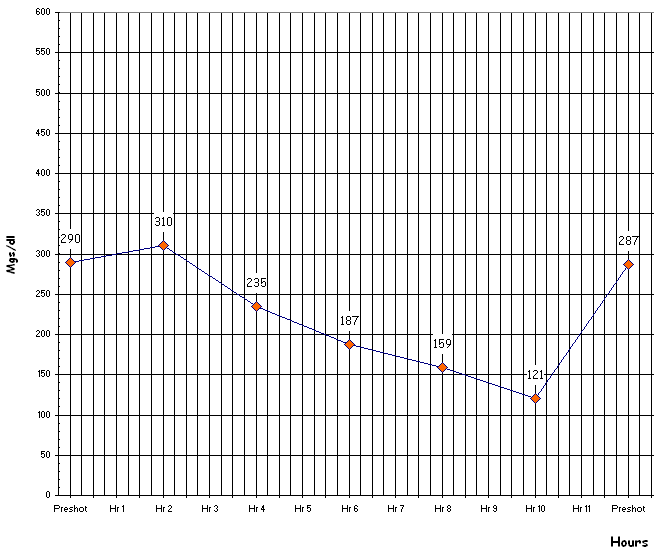 This is likely to be the subject of a large article, but some quick tips to begin:

Retrieved from "https://petdiabetes.fandom.com/wiki/Curve?oldid=16959"
Community content is available under CC-BY-SA unless otherwise noted.