Caninsulin[4], manufactured by Intervet and known in some countries as Vetsulin[5], is a veterinary porcine lente insulin, made up of 30% semilente (short-acting) and 70% ultralente (long acting) insulins.

At present in the US, Caninsulin is FDA-approved for use only in dogs and, just recently, for cats, under the trade name Vetsulin. However, was often used in the US legally "off label" for cats, prior to formal approval.[6].

How it works in dogsEdit

The majority of dogs on Caninsulin/Vetsulin (two-thirds) also will require twice-daily[7][8] injections. Intervet says that many dogs stabilize better on twice-daily insulin injections. They also point out that when shots are given twice instead of once daily, there are less hypoglycemia incidents and better blood glucose control[9][10].

Most vets are also not in favor of once-daily use because it is harder to regulate a dog on once-daily insulin than twice-daily dosing[11].

Caninsulin/Vetsulin is a lente insulin, which is classed as intermediate, not long acting. Long acting insulins (such as Lantus,[12][13] Ultralente, PZI) have a poor success rate among dogs.

http://www.caninsulin.com/images/insulinactivitydog.jpg
For those with dogs, here is a graph of the canine activity.

This blood glucose graph of Somogyi rebound shows a small dog on once-daily porcine lente injections. You can see how the large insulin dose in once-daily regimens produces a steep low at insulin peak. Note: values are shown in mmol/l (non-US) measurement.

Contrast this with a blood glucose graph with a twice-daily insulin regimen where food and insulin are given on a 12 hour basis. Note: values are shown in mmol/l (non-US) measurement.

How it works in cats Edit

Caninsulin works (somewhat differently) in cats than dogs, sometimes having a shorter duration[14]. Note feline usage was recently approved by the FDA in the US [15], and it is a widely prescribed insulin for cats in other countries.

Caninsulin is a BID (two times a day) insulin[16][17][18]. The bg drop experienced by cats can be a concern if not handled correctly. Because of the (sometimes) steep drop, it is important to make food available around the time of nadir to help "smooth" the curve. This can be done either with a timed feeder or free feeding your cat.

Though some cats can have good results with Caninsulin, (See the case of Butterscotch at Caninsulin-Vetsulin cases) the typical curve, as reproduced here from the manufacturer's website, is very fast-acting and harsh for the first four hours, and doesn't have the duration necessary for 12-hour dosages. If having poor results and it's at all possible to switch to Levemir, Lantus, or PZI insulin, try to do so. 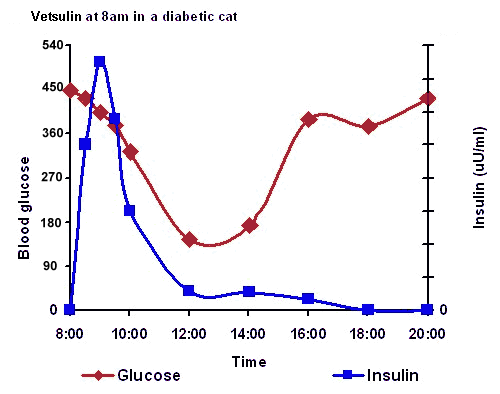 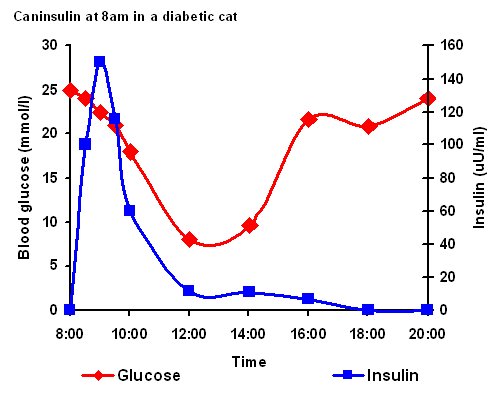 It is a veterinary use prescribed insulin and in most countries must either be purchased directly from your vet or with a prescription.

In Canada, Caninsulin is available OTC, or over the counter[19] online. It is also available online with a prescription[20][21] in some countries, and may cost less that way.

Caninsulin and Vetsulin can be purchased in three ways: a pack of ten 2.5ml vials, the more traditional 10 ml vial or a single vial of 2.5ml. Cats and and small dogs can get new vials monthly without wasting.

Because Caninsulin is a U40 insulin, U40 syringes are the most helpful. If you choose to use a U100 syringe, you must do the U40 to U100 conversion[22][23]. The conversion is not difficult and can give you precision of 0.2 units for those animals needing a more precise dose.

Caninsulin is a pork-based lente insulin. It is a suspension of crystalline (ultralente) and amorphous (semilente) insulins in a 70/30 ratio, as are all Lente insulins[24].Iletin II Lente[25] by Eli Lilly and Monotard Pork by Novo Nordisk were pork lente insulins. The difference between them is: Vetsulin/Caninsulin is made by Intervet for veterinary use and is a U40 strength insulin--the Lilly and Novo insulins were U100 strength. U40 insulin is more convenient for small animals since it's more dilute and you can therefore give fine doses more easily.

Caninsulin is an aqueous suspension of insulin containing 40 IU per ml of highly purified porcine insulin (Lente); 30% is amorphous[27] (non-crystallized) zinc (Semilente) insulin and 70% crystalline (in crystal form) zinc (Ultralente) insulin. The difference between Caninsulin and both Iletin II Lente[28] made by Eli Lilly and Monotard Pork[29] made by Novo Nordisk is this: Caninsulin/Vetsulin is a veterinary insulin of U40 strength. Both Novo's and Lilly's insulins were U100 strength.

No Lente-type insulin regardless of species can contain any NPH/isophane insulin[32] or any R/Neutral insulin[33][34].

Both are chemically impossible: the phenol preservative present in NPH/isophane alters the action of Lente-type insulins, creating a mixture with an approximate action of R/Neutral[35].

Lente-type insulins cannot be dispensed in pen or cartridge form because the glass ball used to mix the insulin in these devices will shatter the Lente crystals[38].

Insulin manufacturers[43] indicate that R/neutral and semilente, Lente, ultralente insulins are able to be combined in the same syringe, but only just before injection. In pre-filled syringes, the zinc suspension of the Lente-type insulins binds the R/neutral, causing it to lose its short-acting effect. Various studies have documented this, and some doctors advise against using R/neutral in the same syringe with the Lente family of insulins[44][45][46][47].


Cite error: <ref> tags exist, but no <references/> tag was found
Retrieved from "https://petdiabetes.fandom.com/wiki/Caninsulin?oldid=17110"
Community content is available under CC-BY-SA unless otherwise noted.